Not long after the conclusion of Operation Flintlock, the American invasion of the Marshall Islands in early 1944, the Army tried a new method of documenting the course of the battle: “company interviews” during which a historical officer and his staff held session with individual rifle companies, allowing the soldiers themselves to tell the story of the battle, with the narrative being passed from one man to another as they relived events. The result of this series of interviews was Island Victory by Lt. Col. S. L. A. Marshall, first published in Infantry Journal in 1944 and now available on Kindle. The book recounts the actions of 7th Infantry Division, which was assigned to capture the southern half of Kwajalein Atoll (the northern half was taken by the 4th Marine Division).

The unsanitized narrative created a vivid account of close combat in the Pacific War, and a pattern that would be repeated in battles to come. Like many Japanese-held islands along the Central Pacific axis, Kwajalein was small, flat and densely fortified. Subjected to a massive bombardment prior to the landings, the terrain awaiting the soldiers was a tangled mass of destroyed structures, rubble, blast craters and felled vegetation. Movement on the island “was like trying to steer a true course through a thousand-acre garbage dump.”

The tempo of the battle was set by the combination of nightmarish landscape and confined geography. Maneuver was impossible. The only option was to establish a single “skirmish line,” shared by two regiments, that extended the entire width of the island and gradually advanced the entire length. The Japanese had sustained heavy casualties from the bombardment and their defense was completely disaggregated and uncoordinated.

Part of their numbers fought on with some fierceness but their resistance was hysterical and cataleptic and expressed itself chiefly in the effort to kill one or two Americans before the Japs themselves died. In this state of mortal deterioration, they became blinded and deaf to developments of battle which would be likely to have a marked effect on more self-collected troops.

However, thousands of Japanese soldiers were still deeply embedded in ruined fortifications, rubble piles, collapsed trenches and any other cover available. As the Americans advanced, every potential enemy position had to be flushed with grenades, satchel charges and flamethrowers.

More than fifty per cent of the garrison were killed below ground with high explosives planted by our engineers and Infantry. Most of the corpses counted above ground had been brayed to death by the Field Artillery.

The nightmarish terrain made traditional fire and movement tactics impossible and communications between units extremely difficult. Combat devolved to small groups of men, rarely larger than squad size, improvising their own actions as the line gradually moved forward. “Such was the chaotic state of the ground and such the nature of the fighting that the Infantry often could not see its own neighboring elements at distances greater than fifteen or twenty yards.” Higher headquarters could do little more than delineate boundaries between units and maintain a vague awareness of the situation. At one point an entire company was thought to have been annihilated and its fate was only revealed when the missing Captain walked into his battalion CP to report that his company was in position to hold for the night.

This and many other peculiarities of the operation would be hardly understandable to those who had not witnessed the Kwajalein battle. The action was indescribably chaotic; it was like trying to fight your way across the landscape of a nightmare.

I am reminded of Eugene Sledge’s haunting memoir of his Pacific service on Peleliu and Okinawa, where heavy Japanese resistance slowed operations into something akin to static trench warfare. Brutal combat day after day on the same shattered terrain gave the Marines an intimate familiarity with the land: every stump, boulder, depression, knoll, etc. had a name and a significance in the course of the battle. Combat completely transforms the meaning of the landscape. Mundane terrain features that are not even noticed in peacetime can suddenly become linchpins upon which the outcome of the battle depends.

On Kwajalein, 10 yards was an operationally significant distance and 100 yards may as well have been a different planet.

As the day wore on past noon, the battle lost its sweat for the men of 1st Platoon. The fires still blazed around the island but a strong wind from the eastward was whipping the smoke to the lagoon side. The men saw no sign of the enemy. They were through shooting for the day. They idled behind the palm stumps and in small shell craters and if they snoozed now and then in the strong sunlight, the enemy took no action to rouse them from their slumber. They knew that the left must be having some trouble because they could hear the rattle of automatic fire and snort of grenades exploding on that flank. But that was someone else’s fight and the sounds signified little more to them than did the distant rumble of the artillery breaking over Kwajalein Island where the battle of the 32d and 184th Regiments was wearing into its third day. That one hundred yards of mangled palm forest which separated the two platoons made all the difference, and their imaginations could not bridge the distance. It was as well so. They could do nothing to help the 2nd Platoon and rest is good for weary feet wherever it is to be had. They marked time and they enjoyed the afternoon.

Lt. Col. Marshall’s interviews also recorded some of the visceral moments of war that would never appear in contemporary official battle histories: the soldier who – understandably – loses composure and vomits uncontrollably after being splattered with the gore of a Japanese soldier he killed at close range with a grenade; the unnamed sergeant who starts speaking and behaving erratically after mentioning that fate was catching up to him for an evil deed he committed in his past, and is eventually killed; the eerie nighttime encounters between Americans and Japanese stragglers behind the line of battle, when both would go on their way instead of risk shooting their own side in the darkness; the squealing sound that the Japanese made in the mistaken belief that it would frighten the Americans, who actually found it hysterical. Moments like these help define battles, but they are often ignored in official accounts that emphasize a strictly tactical narrative that usually does not reflect the chaotic reality.

Island Victory is an obscure book about an obscure battle, but it effectively describes the chaos of battle, the “fog of war,” and how units adapt to combat in difficult terrain. 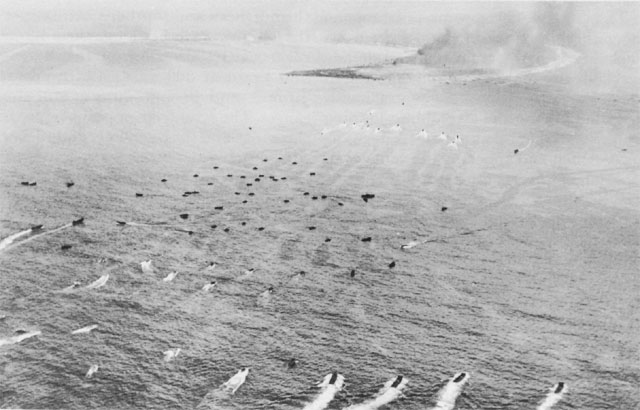 The Geography of Warfare, published in 1983, is a collection of strategic and political musings by Patrick O’Sullivan (Professor of Geography at Florida State University) and Jesse W. Miller (Professor of Accounting at State University of New York). Like many other similarly themed books published around the same time, the book is a wide-ranging, searching work; a modest contribution to the strategic remooring that was just beginning to occur as America recovered from the post-Vietnam haze and responded to the perceived Soviet ascent.

Not quite so simple…

Their post-mortem analysis of the domino theory shows the value of remembering that strategy occurs in a physical plane and is still subject to geographic limitations:

Since there is no formal statement of the domino theory, in order to analyse its logical structure we can only examine the mechanics of the analogy. The elegant, rippling collapse of a row of dominoes derives from its artful arrangement in a state of unstable equilibrium so that any disturbance will be transmitted along the row. The pieces are endowed with potential energy by standing them on their ends so that each will strike the next as it falls. If a gap greater than the length of a piece separates two dominoes, the chain reaction ceases. The dominoes have three states: standing, falling and fallen. That ‘falling’ and ‘fallen’ equate with ‘going communist’ may satisfy the moral perspective of those who apply this theory. On the other hand they might have been disturbed that the fallen state was a stable equilibrium while standing was unstable. The red and white characterisation of politics implied by the analogy is not only naïve and insulting but also runs contrary to a geographical sense of uniqueness. It utterly fails to capture the significance of regional or national identity which daily we see dominating mankind’s sense of self and place.

The model treats of aggression from one end of the row as the potential energy of the first domino is translated to kinetic energy by an initial tap. It falls, registering a change to the same affiliation as the aggressor and, in so doing, imparts this character to the next domino as it strikes it down and so forth. What the necessities of similar size and appropriate spacing translate into in geographical terms is unclear. Obviously in order to land on the beaches of San Diego some very large dominoes would have to be stationed on the Philippines, Wake Island and Hawaii. The existence of a gap like the Pacific should quiet fears of the red menace wading ashore in California. In the proliferation of the theory’s use, oceans or intervening nations are obviously not seen as gaps containing the contagion, but can be conveniently erased. The nature of the contamination process is not made very clear by the analogy. ‘Knocked over’ is redolent of liquor stores rather than nations and hardly provides a rich enough description of the process to prescribe preventative action. ‘Propping up’ has been used to indicate one type of solution, but has proven difficult to translate into successful political, military and economic operations. ‘Knocking out’, the lateral displacement of one or more pieces to provide a fire-break to check the progress of the conflagration, does appeal to some military minds as a feasible action. (p. 100-1)

END_OF_DOCUMENT_TOKEN_TO_BE_REPLACED

"NerveAgent" holds an MS in Defense and Strategic Studies. He served in the U.S. Army and deployed to Afghanistan. He has worked as a private security contractor, and is currently employed as a Federal law enforcement officer.

"I believe that the following would be the true way to paradise - learn the way to hell in order to flee from it." -- Niccolo Machiavelli

I to my perils
Of cheat and charmer
Came clad in armour
By stars benign.
Hope lies to mortals
And most believe her,
But man's deceiver
Was never mine.

The thoughts of others
Were light and fleeting,
Of lovers' meeting
Or luck or fame.
Mine were of trouble,
And mine were steady;
So I was ready
When trouble came.

The Empire Has No Brains